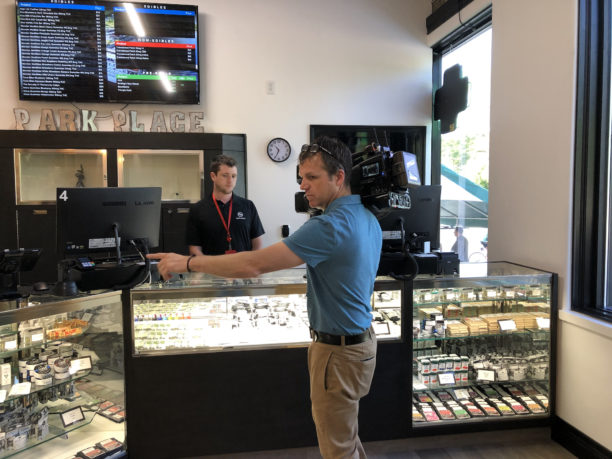 In the mix of communication tactics, business owners have multiple options from traditional advertising to social media and everything in between, but for quick results and a big bang, nothing beats using PR for promoting cannabis brand. Media relations is part of the PR package and it is great for reaching new audiences beyond your social media circle.

It might feel like traditional media is out of reach, but if you have a good story and are willing to pitch and follow up, the benefits are immense.

Here’s the story about how PR helped the start-up of Park Place Provisionary by Agri-Med and garner significant news coverage.

Park Place Provisionary is a locally-owned medical marijuana provisioning center in Muskegon, Michigan. It is also the first state-licensed center in the county and one of just a few on the in West Michigan. Those two things are notable and newsworthy and here’s why.

Increasingly, medical marijuana businesses in Michigan are owned by people who live outside the community. That’s because Michigan municipalities, for the most part, have opted-out of the zoning that allows them. So, with fewer places to locate, marijuana entrepreneurs are spreading out across the state and coming into communities where they have no connection.

We’ve seen it in Grand Rapids, Michigan’s second largest city where it is estimated that of the 80+ applicants for medical marijuana permits less than five are city residents. We’re not going to debate local ownership in this post. That being said, we think local ownership is the best option for a community.

The strategy we used to write the press release and make the pitch focused on local ownership and being the first to open in the market. We were able to use that hook to attract the attention of not only the Muskegon media but television stations in Grand Rapids, too.

Here’s some of the text from the press release and I’ve highlighted parts that made this newsworthy.

Highlights of the Press Release

The building has undergone extensive renovation, connecting with city water and sewer, landscaping, lighting, and comprehensive security and surveillance, making the building secure, compliant and accessible. Located in Muskegon’s marijuana overlay district, Maki’s business is the first to be completed and opened in Muskegon.

“It’s great to be able to open my business in the place where I live. Being part of the community helped with everything from securing the property to working on-site every day to finding local contractors,” said Maki. Part of his motivation for getting into medical marijuana was to create a business where his sons and other close family members would want to work. His nephew Aaron Smith is the financial manager and his partner Tracy Powers is vice president. Other company leaders include non-family members. Charles Bronkema is the operations manager, and Cindy Devenport is Park Place’s compliance manager. In all 13 new jobs were created at the facility.

Agri-Med was the 9th applicant for a medical marijuana license when the state began licensing in December 2017; it was the 5th prequalified license that the state issued.

Hooks and Visuals for Cannabis PR

Park Place Provisionary was lucky to have so many good hooks: local, family and first. The media used those and also focused on the building renovation and how marijuana was improving a languishing industrial park in Muskegon.

We also created a small event, a ribbon cutting and grand opening for the store. It’s traditional for new businesses to cut a ribbon, and doing this at Park Place Provisionary helps normalize cannabis to people in the community. A ribbon cutting also allows the business owner to invite family, friends, elected officials and community leaders to gather and be part of the celebration.

In public relations terms—the event and announcement was a home run. We garnered coverage from three television stations, several local newspapers and a public radio station, a business paper and an online hyperlocal news site. It’s a great example of how using PR for promoting a cannabis brand can bring new customers.

The initial impact was good for Park Place—they went from seeing about 20 customers in the first few days of the soft opening to a peak of more than 100 after the ribbon-cutting.  Keeping the momentum is the next step—communicating with patients via text and email, using social media and cannabis digital outlets to grow the business. And always looking for the next story to share with the media.

Here are some of the links to the media stories that Canna Communication secured for Park Place Provisionary showing how using PR for promoting a cannabis brand can work and the messages that come across.

From Mlive, Muskegon’s newspaper and online news source. Another story was on West Michigan’s ABC affiliate, WZZM 13. The store also was featured on the local Fox affiliate, Fox17. Park Place Provisionary was also on the air at West Michigan’s public radio station WGVU.

WOODTV8 West Michigan’s NBC affiliate did an advance before the grand opening.

Let’s Talk About Your Cannabis PR

If you are opening a new facility or have another story to share related to your cannabis business or want to explore how using PR for promotion your cannabis brand can help you grow give us a call.

Public relations is our specialty. Contact Roberta F. King, APR to get the conversation started.