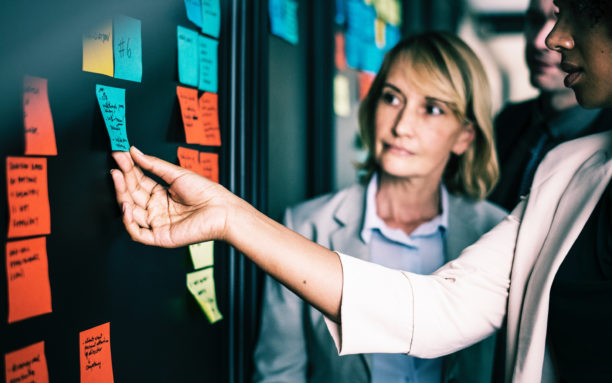 Last week I attended the MJBizConNEXT conference in New Orleans for cannabis entrepreneurs and professionals. This was my first marijuana
conference and I wasn’t quite sure what to expect. The structure was the same as other conferences I’ve been to, keynote speakers and specialized sessions, and of course networking. But what made this one different was, I was surrounded by other professionals who are in my industry—cannabis. It gave me much needed context and perspective on what’s going on in North America, other than my microcosm of West Michigan.

One overwhelming topic from the conference was the importance of women in cannabis businesses.

Irie Selkirk, with Emblem Cannabis in Ontario, gave a great presentation about engaging not only female consumers, but female leaders. She thinks it’s crucial that we establish an industry with strong female leaders, and I couldn’t agree more.

According to a 2015 survey from Marijuana Business Daily, women held 36 percent of leadership positions in the cannabis industry. MJBiz conducted an updated survey on the topic in August 2017, and the number of women in leadership roles had dropped to 27 percent of executive roles. Women need to continue to not only represent in this industry, but to lead this industry. And if we don’t want to see continued drops in women leadership we have ensure that women have power and voice in this industry.

Ms. Selkirk reflected on her first cannabis conference and how she and other women there felt left out. They felt more comfortable sitting outside the building to network, than the expo floor. This brought up a great discussion about how women feel outnumbered on the expo floor, and how men (the vast majority of the vendors are men, with a few booth babes) interact with them. Several of the women in the session felt intimidated by the overwhelming presence of men on the expo floor and didn’t interact as much as they normally would. Ms. Selkirk encouraged women to speak up and take control of what you want to accomplish in cannabis. If you can’t find what you want, create it. Can’t find other women in cannabis to network with? Create your own network. Want a more balanced expo floor? Get some booth space. Make your voice heard and lobby for change.

The keynote speaker was Kevin O’Leary from the hit TV show Shark Tank. Mr. O’Leary, or Mr. Wonderful, as he’s fond of calling himself, said he prefers to invest in women-led businesses because he gets better returns. O’Leary found that about 95 percent of the women-led companies meet their financial targets, compared with just 65 percent for businesses with male leaders.

He has a couple of theories about why female-led businesses outperform male-led ones:

He also talked about how when goals are achieved, company morale goes up, which can help create a great culture, which obviously leads to less employee turnover.

In short, his largest returns have been from women-led businesses.

Women—we make up over 50 percent of the US population, yet according to the Institute for Women’s Policy Research, we made only 80.5 cents for every dollar earned by men, a gender wage gap of 20 percent.

The cannabis industry represents the future—a chance to enter a growing industry with relatively low barriers. It is an opportunity to help make medicine available to people who desperately need an alternative to opioids and other over-prescribed drugs. And we have a chance to shape the future of this industry into a more equitable and inclusive environment, where women can make their mark, and open doors of opportunity for future generations.

After all, the future is female.