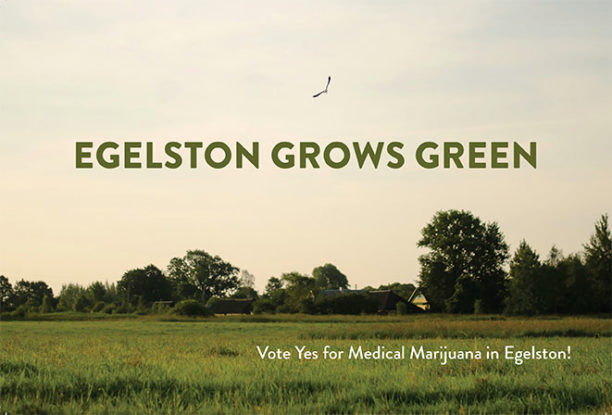 Early last summer we were contacted by a cannabis entrepreneur that was facing opposition to a medical marijuana grow business in Egelston Township, Michigan. He realized he needed professional communication assistance with this issue and we jumped right in.

Background:
The elected officials in Egelston Township opted-in for medical marijuana businesses in late 2017. Soon after opting in, the entrepreneur/grower who had already purchased property in the township started construction on buildings for greenhouses and a provisioning center. In the spring of 2018, a resident of the municipality who is also a developer that owns a subdivision adjacent to the two greenhouses under construction began circulating a petition to upend medical marijuana zoning in the community. The petitions were validated by the township clerk, and the proposal would appear on the mid-term ballot. If the vote didn’t go the grower’s way, he would lose the opportunity to have any cannabis business in the township.

We were asked to create a campaign to persuade voters to keep medical marijuana zoning in the township.

We provided the client with a full political campaign proposal and he chose to rely on web, social media, direct mail, and yard signs. Our messaging focused on providing accurate information and guiding conversations while helping people understand two issues: zoning and medical marijuana.

Strategy:
After a discovery meeting with the client, his horticulturist, attorney and a business colleague we wrote a set of key messages that went to the heart of the zoning issue.

The messages focused on:

We created a theme for the campaign and began work on developing a website and a Facebook page. We presented Egelston Grows Green as the theme because it spoke to the idea of growth in the township, not only cannabis itself but jobs and tax revenue. We wanted to include the township name in the theme to create a sense of place, identity and pride.

The key messages were used to create website content, to launch the Facebook page and to provide content throughout the summer. As it came closer to election time, we promoted the vote and ended each post with a Vote YES for medical marijuana zoning message.

In May of 2018, Facebook put restrictions on two essential parts of our campaign: political advertising and marijuana pages. The platform required anyone wanting to conduct political advertising to supply a physical mailing address and a copy of a photo ID like a driver’s license. We did this but were thwarted by another new policy that made marijuana pages unsearchable. Cannabis pages and groups that had been easy to find for years had disappeared from the search tool, and Facebook was denying requests to boost to create ads for all marijuana businesses regardless of what they did, i.e., law firms and accountants were being denied promotional space. This made launching the site and promoting content a challenge, especially for a new page. We relied on a network of advocates to share our daily posts and a popular community-centric Facebook page, Wolf Lake World News. We posted our information on that site and engaged in multiple conversations there, too.

We created the website egelstongrowsgreen.com for key messages and details about the growing operation, that people had an interest in. They wanted to know how this business could potentially affect them: everything from the smell, to security, to job creation, to compliance, water use and plant waste. We posted two informational videos to the page as well. All the time we are reinforcing the message about voting yes for medical marijuana. 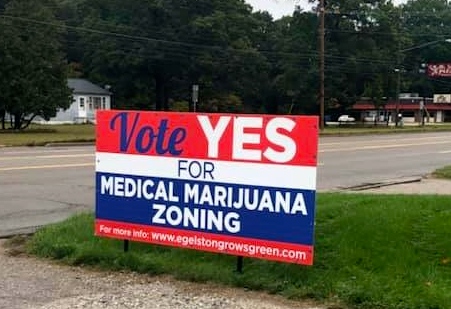 One month before the election we helped the client with a succinct, clear message for yard signs and designed a postcard for voters. These collateral materials reinforced the singular importance of voting yes for medical marijuana zoning. The postcards were mailed to the 7500 voters in the township. The client also held a yard sign pick-up event with principals on-site to answer questions.

In the days before the election, one of the business partners secured a video interview with a hyperlocal indie news channel, and we were able to share that interview and clear up some of the misconceptions that the opposition was promoting.